A while ago we looked at benchmarking Mathematica 7 on a Core i7-980x. Then the home use license was limited to four processor cores and the comparison processors in the benchmark report quite old. Mathematica 8 was recently released and so an update is due.

While subjective, the usage of the cores appears a bit better in Mathematica 8 as viewed by Windows’ Task Manager. The generated report lists more recent processors and the scores may be normalized against one processor on the list. 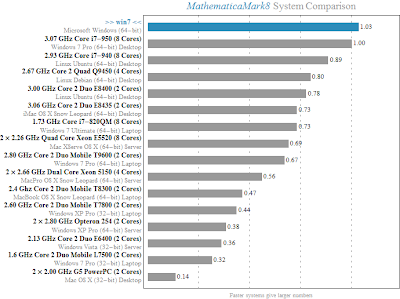 While Parallelize[] does not work on BenchmarkReport[], explicitly starting the parallel kernels does have an influence on the benchmark score. Select menu item Evaluation->Parallel Kernel Status and then press “Launch All” in the new dialog. The home use license appears to still be limited to four kernels. (It is possible to manually increase the number in the Preferences, but the most that ever runs concurrently is four. So the ability to increase the count may be a UI problem.)

Running the benchmark again shows additional load in the Task Manager and a slightly higher score. Note that the machine name has been replaced with “4-node homogeneous cluster.” If you have a less restrictive license please post your benchmark score for comparison. 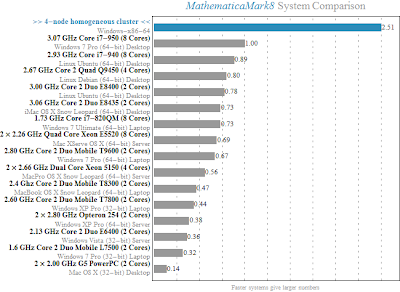 Generic benchmarks may not be representative of day-to-day demands. It’s nice to have a benchmarking method built into the application as the score may be more meaningful. Perhaps Wolfram could add I/O to the list of benchmarked operations. This is one area where Mathematica, including version 8, could use improvement. Reading and writing large (100MiB+) data files is very painful.

Timing Arduino Due digitalWrite and analogWrite