Epix‘s SV5C10 is a great camera for those wanting to develop solid computer vision systems. I’ve used them on several systems with great success, on both Windows and Linux machines, and appreciate the tolerance of their software and hardware to changes in the Linux kernel and the well documented API. Their frame grabber cards use Altera FPGAs, which creates good feelings, having used both Xilinx and Altera products and greatly preferring Altera’s much nicer development environment. The few times that I’ve had minor problems, someone at Epix has always been fast to provide a solution.

Before using the Epix cameras, I would capture stills using standard point-n-shoot or DSLR cameras, tethered to a computer and an API provided by the camera maker, generally Canon. This worked but the Canon API is unsupported, which also means poorly documented, and, at least at that time, not available for Linux. Using the consumer cameras for scientific work is a bit worrisome as well because it’s never completely clear what the camera may be doing to the image, even in raw mode. These problems do not exist with the Epix cameras, and while slightly more expensive than the consumer cameras, the cost is very quickly recouped in reduced programming time and maintenance. Supporting the consumer cameras through the years as models came and went was a big time sink.

In a recent project, a camera was positioned co-linearly between the subject and the lights, resulting in some backlighting glare. To block the glaring part of the light, a small baffle was made. No significant change in exposure time is needed as little light is actually being blocked. The rough diameter was found by prototyping with paper models attached with tape.

The baffle was printed on the Thing-O-Matic, and added to the end of the lens with an interference fit. The main disk of the baffle is thin with thickened inner and outer rings for support. The inner diameter was bored on a lathe to true it and achieve the correct interference fit. Without boring, to obtain such tight tolerances, quite a bit of trial-and-error would be required, due to shrinkage and machine precision. And while the entire baffle could have been made on the lathe, the cost would have been much higher due to wasted material, not to mention being a large for my little lathe.

In addition to the baffle, a small standoff was also made from 1 1/2″ steel rod stock, trued, knurled, and 1/4″-20 clearance hole drilled. Because stock of the appropriate size was available, and both ends needed to be very parallel, the lathe was used. The knurling is just for appearance.

Subtractive machining (lathe, mill, etc.) and additive machining (3d printing) work well together, and provide alternatives for minimizing cost and machining time, during prototyping. And in this case with tools available to many people, not just industry. 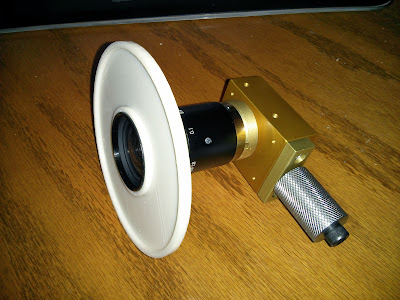 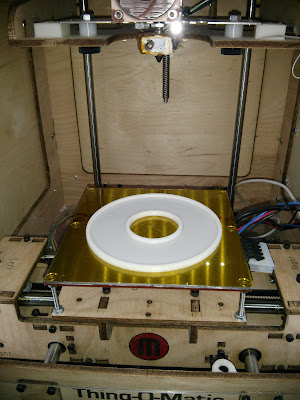