The government’s Cash-for-clunkers program has been a hot news topic. This program entices people to purchase new vehicles by providing up to $4,500 for trading in a “clunker.” Other than the national economic stimulus of new automobile purchases, the program promises to improve the average fuel efficiency of the nation’s automotive fleet.

Recycling is most efficient when the product of recycling is as close in form to the product being recycled. The less processing, the better. Instead of destroying the clunkers, the program would be easily greener if clunkers were repaired and re-purposed.

My first car was a 1982 Chevy Celebrity purchased secondhand in 1991 for $1,500. I drove that car fourteen years, past 309,000 miles, and ultimately I drove it teary-eyed to the salvage yard. Maintaining this old “clunker” saved me much more than $4,500, and sadly few cars in 2009 barely exceed its fuel efficiency. With the exception of my eduction, that old car has been my best investment. No other car has meant as much; no other car has been as affordable. 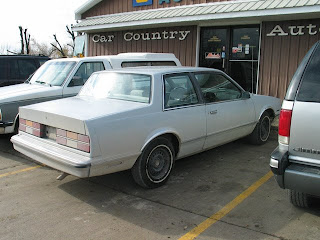