Resistance decade boxes are great for testing precise values in projects or for reference in calibration. One can tediously build one, or pick up a commercial one such as the AEMC BR07. The AEMC BR07 looks great but be aware the metal box takes up valuable space (16 x 3.25 x 3″) on a small lab bench. The specs are 0.1mA max, 1%, and an impressive 0 to 11.11111 megaohm range. Internally it is clean, uses rotary switches and mostly 1% 1/2W resistors (the first decade uses 0.5%). There is a 1/4W 146ohm resistor in parallel with the first position, 1 ohm resistor, on the first decade, probably to fine tune the lower values. The rotary switches are solid, add only ~50 milliohm of additional resistance, but are the break-before-make type, which could be problematic for a circuit sensitive to large changes. Disappointingly, only a single cable is included, a case ground. A sticker on the bottom says “Made in China.” 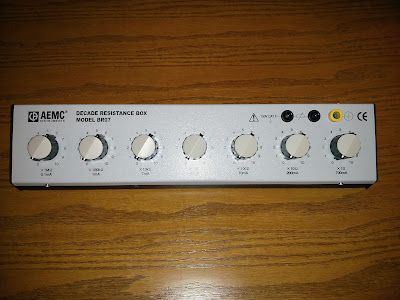 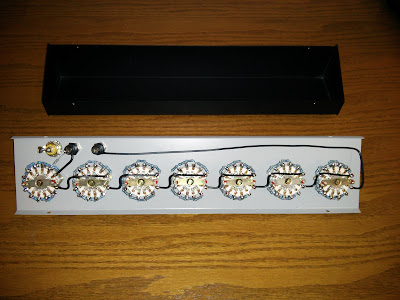 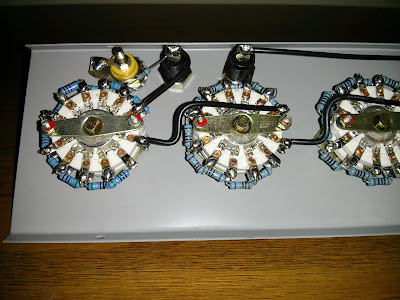 IET Labs has some smaller alternatives, in addition to capacitance and inductance boxes, that may be worth a look.

Apparently, there is a difference between true decade and substitution boxes, where the decade box is a higher precision item for testing and calibration. Comparing prices of decade boxes on Mouser or even eBay, is pretty eye opening.

Gerry Sweeney has an interesting video showing the internals of a higher quality decade box and describing a couple compact alternative using SMD resistors that he designed, and a second video on a capacitance version. He also has a couple Tindie projects for resistance and capacitence. For my needs, substitution and minimal space, these may be a better fit than the AEMC box.